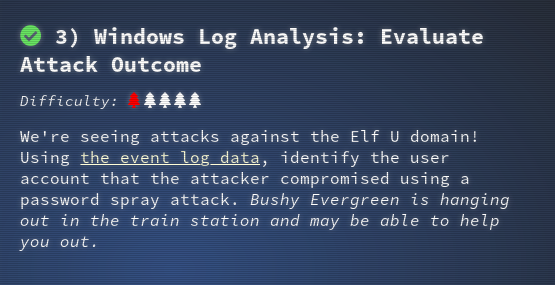 We're seeing attacks against the Elf U domain! Using the event log data, identify the user account that the attacker compromised using a password spray attack. Bushy Evergreen is hanging out in the train station and may be able to help you out.

The best output filter was | ConvertTo-Csv. This ensured that I got all of the output.

The first thing to note is the list of usernames that attempts were made against:

There were then successful logs made by: pminstix DC1$ supatree

As 'supatree' exists in both lists, it can be assumed that 'supatree's account was compromised.